Oxygen first aid is considered to be the most effective first aid treatment for a diver injured while diving, after ensuring the diver’s airway, breathing and circulation.

All diving operations in Fiji MUST have a diving emergency oxygen kit on each dive site as specified in the HEALTH AND SAFETY AT WORK (DIVING) REGULATIONS 2006.

Which kind of oxygen regulator is suitable for diving emergency oxygen kit?

One type is a constant-flow style, which can deliver a fixed or adjustable flow of oxygen.

Another is the demand regulator; it functions like a scuba regulator and delivers oxygen when the demand valve is activated.

The third style is the multifunction regulator, which combines the features of both the demand and constant-flow regulators. A  multifunction regulator is preferred over the other styles because it will allow a rescuer to provide as close to 100 percent oxygen as possible to two injured divers simultaneously and permits various mask options.

As a reminder, a diving emergency oxygen kit should have both a constant flow barb and the DISS threaded outlets for the Tru-Fit demand valve mask, and your regulator must have a constant flow MINIMUM setting of 15 lpm to try to maintain a high concentration of inspired oxygen.

Why would you need a new Dive Emergency Oxygen Regulator?

Perhaps the single biggest environmental concern regarding oxygen systems is corrosion of the metal parts. The locker of a dive boat represents a harsh environment with plenty of heat, humidity and corrosive salts.

“Even the slightest amount of salt air that gets trapped inside a case and then sealed up begins to corrode the equipment,” Mr Gow says. “We’ve opened up units stored on dive boats that are so rusted and corroded you would be afraid to turn them on for fear they would explode.”

To protect an oxygen system from corrosion, store it in a watertight case with a silica gel packet to absorb any moisture trapped inside.

The regulator/control valve is really the heart of the emergency oxygen system, and it must also be kept clean, dry and free from physical damage.

Bob Eberly, president of EMS Technologies in Leola, Pa., said one potential problem with the cylinder/regulator assembly is physical damage to the pressure gauge.

Mishandling, dropping or improperly stowing the emergency oxygen system can sometimes result in a damaged gauge that may not provide a reliable pressure reading. If physical damage to the pressure gauge or the regulator assembly itself is noted, have the unit repaired.

Another potential problem with an emergency oxygen system involves the seal between the oxygen cylinder and the regulator assembly. A Public Health Notification updated by the U.S. Food and Drug Administration and the National Institute for Occupational Safety and Health in 2006 revealed that faulty or improper sealshave resulted in at least a dozen regulator fires. At issue were the two different types of seals commonly used in emergency oxygen systems; they have decidedly different characteristics.

One type of seal is a crushable plastic or nylon device designed for a single use. When the regulator is tightened to the cylinder, the material deforms to create a good seal, but the deformation is permanent. If these seals are reused, they require additional torque to ensure a good seal. If they start to leak, the friction caused by the flow of oxygen across the face of the seal can cause ignition.

Many manufacturers recommend a different type of seal, referred to as a “sealing washer,” that is designed for multiple uses. These consist of metallic rings encompassing an elastometric element made of a flexible polymer. These are generally more expensive than the crushable seal, but they can be safely reused many times without the need for additional torque to ensure a proper seal. All DAN oxygen units come equipped with this type of “oxygen washer.” 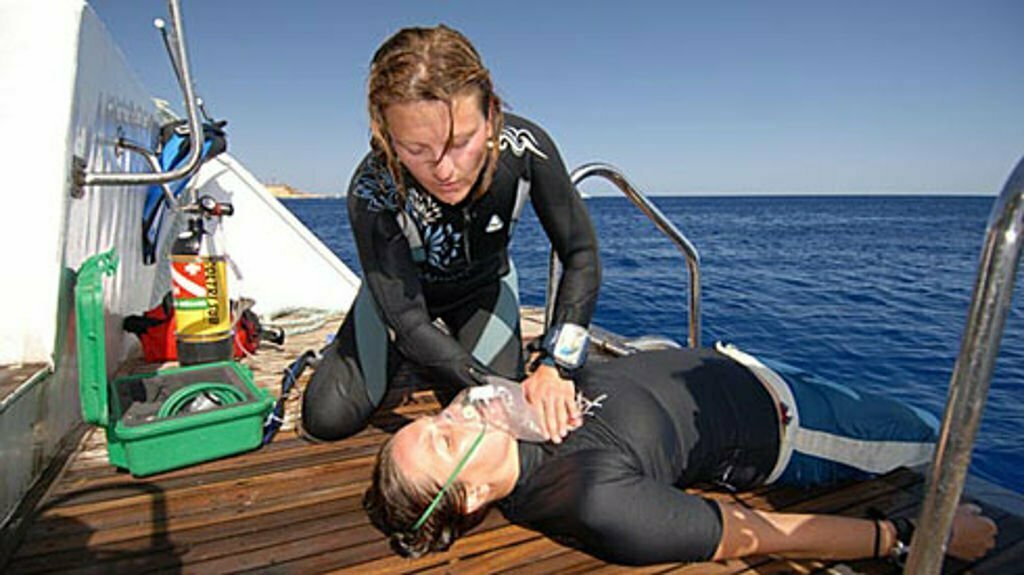